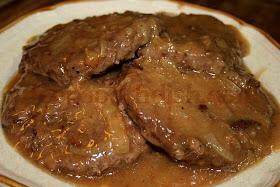 Hamburger Steak with Creamy Onion Gravy:
Then dip each patty into 1/3 cup of flour.

And brown them on both sides in a skillet with a couple tablespoons of hot oil.

Remove and set aside.

Slice up an onion...

...and toss those into the same skillet you cooked the patties in.

While the onions are cookin', mix together 1 cup of beef broth and 1 cup of water, or just use 2 cups of water alone, with some seasoned salt and pepper.

The onions are just beginning to brown so we'll let those go a bit longer.

Add the flour to the seasoned water and whisk that all together well.

Slowly add the flour and seasoned water mixture to the onions...

...and start stirring it up.

Cook and stir the mixture and bring it up to a boil.

Until you see it begin to thicken.

Now stick those browned patties back into the skillet, right into that mess o'gravy, turn 'em and and push 'em around a bit so that some of the gravy goodness seeps right up on top.

Reduce the heat to simmer, cover them bad boys and let 'em cook for another 20 minutes or so.